Alas, it’s time to say goodbye to John Connolly’s Samuel Johnson series. This trilogy took me by surprise with how much I ended up enjoying them. As I’ve mentioned before, I really liked The Book of Lost Things, but sometimes you can really like one book by an author and not like the others. Thankfully, this was not the case for these books. 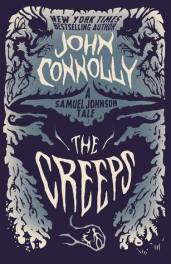 In this delightfully imaginative novel, once again, hell threatens to break loose as Samuel Johnson and his ragtag group of friends must defend their town from shadowy forces more threatening than ever before…

In this clever and quirky follow-up to The Gates and The Infernals, Samuel Johnson’s life seems to have finally settled down—after all, he’s still got the company of his faithful dachshund Boswell and his bumbling demon friend Nurd; he has foiled the dreaded forces of darkness not once but twice; and he’s now dating the lovely Lucy Highmore.

But things in the little English town of Biddlecombe rarely run smoothly for long. Shadows are gathering in the skies; a black heart of pure evil is bubbling with revenge; and it rather looks as if the Multiverse is about to come to an end, starting with Biddlecombe. When a new toy shop’s opening goes terrifyingly awry, Samuel must gather a ragtag band of dwarfs, policemen, and very polite monsters to face down the greatest threat the Multiverse has ever known, not to mention assorted vampires, a girl with an unnatural fondness for spiders, and highly flammable unfriendly elves.

This was a great conclusion to the Samuel Johnson series. I was a bit worried, wondering what John Connolly could have possibly written about to keep my attention with this series (especially since I was a bit bored throughout The Infernals), but this book had a lot of action and development.

I really enjoyed having so many POVs throughout the book. It helped piece everything together to give a more comprehensive idea of what was happening throughout the Multiverse and made everything seem more fast-paced. It’s all still 3rd person, but we get passages from the Great Malevolence, Crudford, Nurd, Samuel, Boswell, the Dwarves, and more. Each character is so different in their personalities and intentions, so this really helped add to the humor of the book.

The snark definitely continues in The Creeps. There might not have been as much of it as there was in The Gates but there was definitely enough to make me laugh. John Connolly provided the cherry on top with more mischief from the Dwarves, the police officers, and other obscure creatures. It’s basically the snarky, sarcastic person’s paradise!

The series felt perfectly concluded by the end. Nothing felt overly rushed, which I feel is often the case, especially with trilogies, and enough new material was included to make The Creeps more than just a means to an end. The last chapter was making me surprisingly emotional (no spoilers!) and it felt like the perfect ending.

I would definitely recommend giving this series a read. Parts definitely feel like they’re being drawn out but the majority of the series is filled with snarky humor, wacky characters (most of them are demons, after all), and interesting plots. The timing worked out perfectly to start The Gates around Halloween and read one a month, ending in December for Christmas. These aren’t obvious holiday reads but they funnily enough turned out to be. Just another great surprise from this series!

3 thoughts on “The Creeps”