Unpopular opinion here but I didn’t love this book! I really enjoyed Emergency Contact and quickly requested Permanent Record from NetGalley (cue disclaimer: I received an eARC of Permanent Record from NetGalley in exchange for an honest review). My excitement and high expectations were dimmed as I read and I wasn’t really into the book until the end. 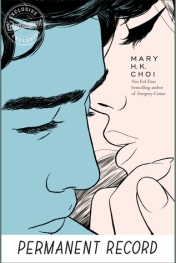 After a year of college, Pablo is working at his local twenty-four-hour deli, selling overpriced snacks to brownstone yuppies. He’s dodging calls from the student loan office and he has no idea what his next move is.

Leanna Smart’s life so far has been nothing but success. Age eight: Disney Mouseketeer; Age fifteen: first #1 single on the US pop chart; Age seventeen, *tenth* #1 single; and now, at Age nineteen…life is a queasy blur of private planes, weird hotel rooms, and strangers asking for selfies on the street.

When Leanna and Pab randomly meet at 4:00 a.m. in the middle of a snowstorm in Brooklyn, they both know they can’t be together forever. So, they keep things on the down-low and off Instagram for as long as they can. But it takes about three seconds before the world finds out…

I marked on Goodreads that this was a 3.5 star read for me but I’ve decided to round down after a couple days of thinking. I was really excited about this book and really wanted to love it but I just couldn’t. Pablo was too self-pitying and caused me to have secondhand anxiety over his responsibility dodging. Lee was too two-dimensional which I understand is kind of the point but it makes a 400 page book pretty boring.

There wasn’t a whole lot of real-time action that seemed to happen in the book. A lot of the plot and conflict took place internally, mainly for Pablo since he’s our POV character. I love a good internal conflict but again, it makes a 400 page book pretty boring. The only real external conflicts Pablo face are related to his debt dodging and the ensuing consequences of that.

I did enjoy reading from a 20-something male’s perspective, but his personality made it so that I couldn’t really care too much about him. So… kind of a letdown character-wise.

Another pro of Permanent Record was the ending and the self-realization and reality Pablo faced. I did enjoy seeing him become a more likeable character, even if it didn’t happen until the last 50-100 pages. It was nice to see his relationship with his friends, family, and self evolve and grow into something new and better.

Overall, this was a good book. If it weren’t for Emergency Contact I probably wouldn’t have liked it as much but I’m trying to review Permanent Record as if it’s unrelated to that (which it mostly is). Although I found the characters pretty annoying and bland, I did enjoy the messages and themes in the book. The settings were fun to read because I’ve never been to any of the places mentioned in the book. I’d give this a read if you enjoy coming-of-age books and Emergency Contact but just be aware that it doesn’t live up to Emergency Contact.