Hey guys! I’m back with another interview from Goodreads. This time Goodreads interviewed Karen M. McManus, author of One of Us Is Lying, about her upcoming book Two Can Keep a Secret. Please remember that I did not participate in this interview- I just read it on Goodreads and wanted to share it with you if you haven’t had the chance to read it. 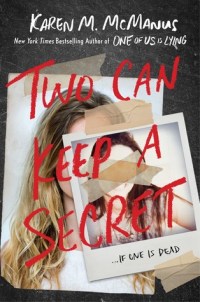 Echo Ridge may seem like a picture-perfect town, but the secrets that its residents keep are downright deadly: Young women have disappeared, and one was murdered. Enter Ellery, the new girl, who has a few secrets of her own. She can’t seem to connect with anyone except Malcolm, whose dark family history intertwines with Ellery’s in the most unexpected ways.

Karen M. McManus is the bestselling author of One of Us Is Lying, a YA thriller that was also nominated in the 2017 Goodreads Choice Awards. By email, McManus revealed more details to Goodreads about her latest book, Two Can Keep a Secret, and the insidious mystery that Ellery and Malcolm become desperate to solve.

“When a third girl goes missing and Ellery and Malcolm were the last people to see her, they want to figure out once and for all what’s going on in Echo Ridge,” says McManus. “The problem, of course, is that secrets are dangerous, especially when you don’t know who’s keeping them.”

Goodreads: Fans of One of Us Is Lying are dying to read your new book. Can you tell us what inspired it?

Karen M. McManus: I’m so happy to hear that! With Two Can Keep a Secret, I wanted to write a layered, twisty story where there’s one big mystery—what’s happening to the girls of Echo Ridge—and also lots of smaller, more personal mysteries that Ellery and Malcolm need to unravel before they can understand the big picture of what’s happening in town and within their own fractured families. The book explores the power of secrets: their ripple effect, the way they can shape families for generations, and the question of whether they should even stay hidden.

GR: Small towns hiding dark secrets is such a beloved trope in mystery thrillers. Why do you think that is?

KM: We all love a creepy little town, don’t we? I’ve always been fascinated by places that look peaceful on the surface but are teeming with intrigue beneath. Ellery’s mother, Sadie, says Echo Ridge is like living in a postcard: “Pretty, shiny, and closed in. Everyone who lives in Echo Ridge acts like you’ll vanish if you venture outside the border.” Narratively speaking, you can do a lot with a setting like that, especially when you factor in a close-knit community that’s constantly in one another’s business and has a vested interest in keeping up appearances.

GR: Your main character, Ellery, just moved in. What are some of the biggest challenges facing her?

KM: Ellery’s not there by choice. She and her twin brother, Ezra, were sent to live with their estranged grandmother during their mother’s court-appointed rehab for opioid addiction. Ellery thinks the root of her mother’s problems started in Echo Ridge, when Sadie lost her beloved twin sister as a teen. Now all eyes are on the twins as the new kids in town, and Ellery finds herself torn between popular kids she doesn’t have much in common with and Malcolm, who’s something of a town pariah thanks to his brother.

GR: The book summary mentions that someone has declared “open season” on homecoming. We know you can’t reveal too much, but how does homecoming play a role in Ellery’s story?

KM: Both of the town’s unsolved mysteries revolve around the event, and it’s homecoming season when Ellery arrives. She hasn’t even been there a week when disturbing acts of vandalism start cropping up around town, referring to previous tragedies and hinting that homecoming is about to turn deadly again.

GR: Your fans have called you a plot twist genius! What, in your opinion, are the ingredients of a really great plot twist?

KM: I don’t think a twist has to be outlandish or shocking to be successful. It’s great when you can surprise people with misdirection, but ultimately a twist works best when it’s believable, feels true to everything that’s come before it (especially the characters), and fits naturally within the narrative. I love when people tell me they never guessed the end, but I love it even more when they tell me that once they finished, they couldn’t imagine it ending any other way.

GR: What lessons did you learn from writing One of Us Is Lying, and how did you apply them to Two Can Keep a Secret?

KM: I think the strength of One of Us Is Lying is its characters. They felt very real to me while I was writing them, and as a result they feel real to readers as well. It was important to me to create a similar relationship between character and reader in Two Can Keep a Secret, and I abandoned early drafts where Ellery and Malcolm weren’t vivid enough. I still remember when a draft finally clicked and the two of them started to almost write themselves, which is when I know I’ve created a character I can feel fully invested in.

GR: What projects are you currently working on now? Perhaps even the sequel to One of Us Is Lying (wink, wink, nudge, nudge)?

KM: That’s exactly what I’m working on! We’re getting close to final copy, and I’m optimistic that we’ll be able to stick with the current projected publication date of January 2020 (though at this early stage, that’s always subject to change). I had so much fun returning to the Bayview universe, revisiting my beloved original four but also up-leveling secondary characters I didn’t get to spend enough time with in the first book.

Bronwyn’s sister Maeve is now a main character, and she was SUCH a joy to write. In addition, two of my favorite side characters from One of Us Is Lying, Cooper’s friend Luis and Nate’s lawyer Eli, have much bigger roles in the sequel. And yes, this book will answer the question I get asked most often: “What happened to Nate and Bronwyn?”

GR: It seems like there are so many new YA thrillers these days; Sadie and Truly Devious come to mind. What do you want to see more of in the YA mystery thriller genre?

KM: I love both those books, and I’m beyond excited to see the depth and breadth of current and upcoming YA thrillers. I’m a sucker for a good retelling (One of Us Is Lyingwas inspired by The Breakfast Club movie, and I really enjoy the Charlotte Holmes series by Brittany Cavallaro as well as Ten by Gretchen McNeil), and I’d love to see more of that in the thriller genre. And let’s have more thrillers mixed with horror, too. If you tell me a book is inspired in any way by Slenderman or something similarly creepy, it goes immediately on my TBR.

GR: And finally, do you have any YA book recommendations that you think our readers should devour?

KM: Always! You already mentioned Sadie, which is one of my top reads of 2018. In the YA thriller vein, books I adore include The Cheerleaders by Kara Thomas, White Rabbit by Caleb Roehrig, Allegedly by Tiffany D. Jackson, See All the Stars by Kit Frick, and Genuine Fraud by E. Lockhart. Other books I loved this year, which are different genres but still total page-turners, include Undead Girl Gang by Lily Anderson, Reaper at the Gates by Sabaa Tahir (the whole series, really), The Belles by Dhonielle Clayton, and To Kill a Kingdom by Alexandra Christo.